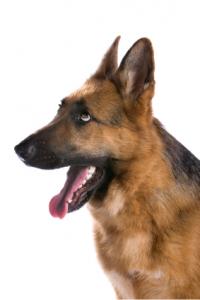 A man is walking through town and he sees a sign “Dog For Sale – See Round The Back”. The man goes to the back garden and finds a beautiful German Shepherd Dog.

He Says “Hello boy” and to his astonishment, the dog replies “Hello there”. “Wow! You can talk..?” asks the man. “Oh yes, I can do lots of things, I’ve done loads of dog training, me, I’m a Dogfather dog” replies the dog. “Amazing!” says the man, “What else can you do?”

“Well it’s a long story, I’ve done lots in my life” says the dog “ I was in the Secret Service, going into meetings and listening in when the bad guys thought I couldn’t understand and reporting back to my masters. Then I was in the SAS in Afghanistan pretending to be a stray behind enemy lines, spying and taking GPS readings, radioing back the goings-on. I could go on, but I won’t bore you. I’m retired now, just looking for an easy life”

“OK. Great.” says the man, suitably impressed “I go talk to your owner”, so he knocks on the front door and asks the man how much he wants for the dog. “Oh you don’t want him really, he’s useless” says the owner “You can have him for free”. “But he can talk” says the man. “Yeah but I’m sick of him, he’s good for nothing, really he is, just take him away”. “I’m amazed” says the man “I’ll have him, I think he’s a fabulous dog. But why do you think he’s useless?”

“Listen mate” replies the owner “Don’t you believe a word that dog tells you. All those things talks about, I’m sick of hearing it. He hasn’t done any of it – He’s a b***dy liar!”