Let’s face it, I could wax lyrical about how wonderful I think I am but ultimately it’s what my clients think that really counts, isn’t it? Here’s what Dogfather clients have to say. You can see more on LinkedIn (See ‘Full Profile’)

Our Staff cross Jimmy was highly reactive to other dogs during his walks & we could only make very slow progress with trying to control him. Graeme introduced us to the slip collar & its correct use & quick recognition of trouble trigger signals. Although he still has episodes his walking is much improved & he is much calmer & more controllable around other dogs, so are we! 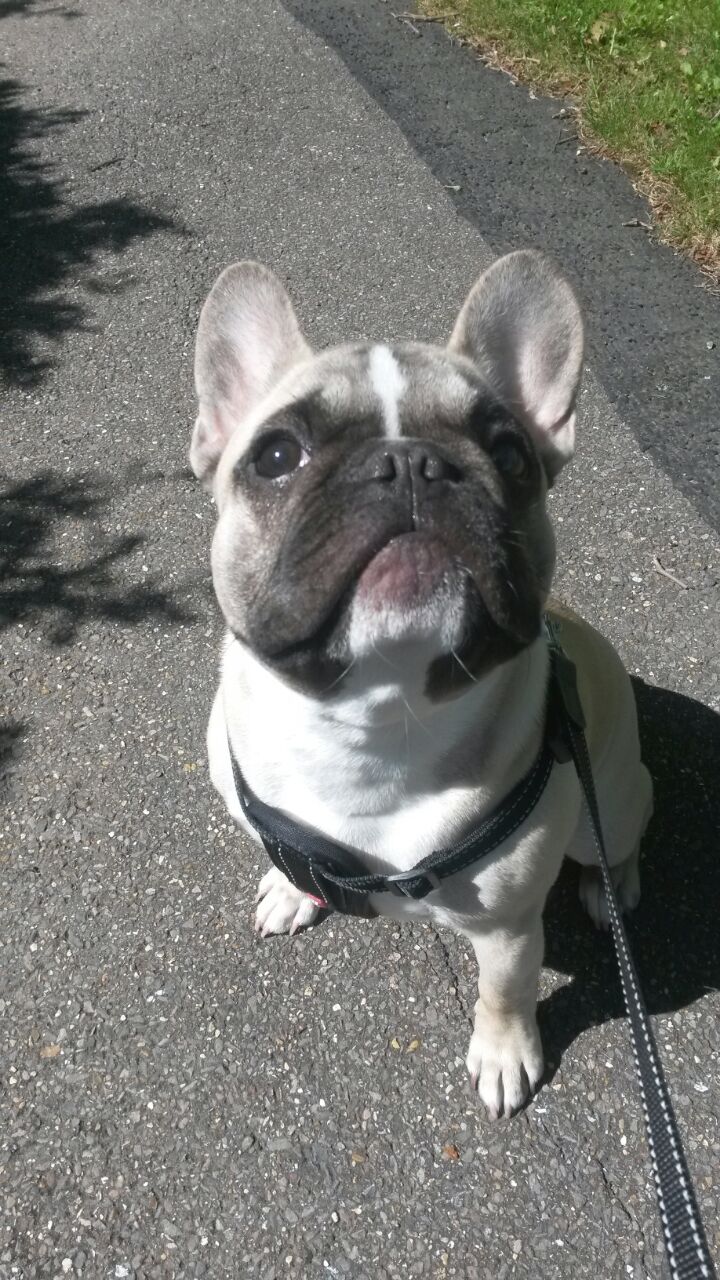 We have a moody French Bulldog and to be honest we started to think our dog had serious behavior issues that were out of control, one minute our dog.. Jeff was cute and cuddly and without warning he would turn into a possessed angry dog literally he would have a frenzy! Every time we took him for a walk there would be an episode, in the past we have taken Jeff to dog training class, paid for a one to one dog trainer who said Jeff was stubborn and moody and told me off for not being in control. Nothing worked!

The final straw happened when Jeff knocked over a table when he tried to jump up at a waiter, we left in tears, we tried a muzzle, impossible for a Frenchie and thought we need to speak to a Vet to see if there is a calming tablet .. yes we were desperate, then a friend suggested the Dogfather!

I have watched the TV shows for naughty dogs and thought no way can that happen in one day! Having owned a dog previously we have tried all the techniques but nothing helped with Jeff.

After Graeme’s visit one week later I have a different dog!! He understood Jeff, wow we were lost for words. Jeff gets anxious and moody , we now know how to not feed his anxiety and calm him down, control his moods , he showed us how to look for the signs and techniques to use to manage Jeff’s temperament.

It is not just myself and my husband who are lost for words so are friends and family, I am hearing…
“No way” and “Wow seriously we can not believe that is the same dog”

We can take Jeff out without feeling on edge, a dog recently growled at Jeff and using the techniques we were shown Jeff ignored the dog and looked at me calmly.

Thank you so much Graeme for not just changing our lives but also Jeff’s . You truly are a Dogfather ! 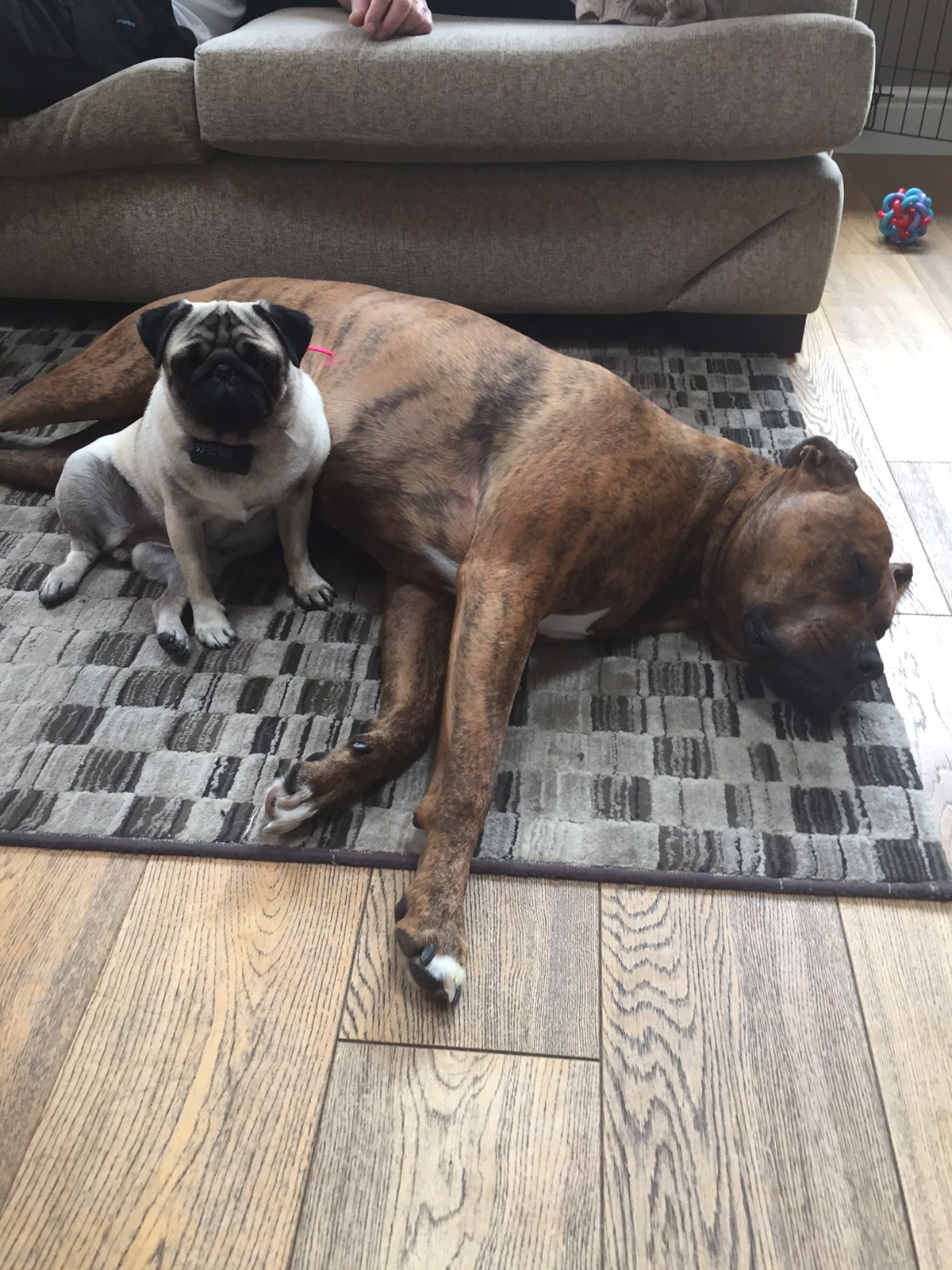 I have taken a short while to write as I wanted to see if we really had made the right decision in asking Graeme to help us… It’s been an extraordinary time!

Our understanding of Leo and his responses have helped bring some calm, and for me especially, some confidence. Could you let Graeme know I am leading not following!
Leo responds in his bolshy/barking way but how we all respond (for the most part) is quiet, slow and body blocking if needed.
We have a sign on the front door, advising visitors/postmen/delivery folks that we are training, so it will take a little while to answer. It’s been very beneficial, I don’t feel hurried to deal with Leo & Maggie So I calmly escort them away from the door. Leo still barks whilst he’s walking away but he IS walking away.

Yesterday the local farmer was hedge cutting in the field next to our house, and Leo had a little grumble but didn’t launch into manic barking. Amazing! I found some toys & distracted him.
It takes full commitment to implement change, not always easy. Rich’s mum visited & Rich had to stop what he was doing (lighting the wood burner) and concentrate on Leo. So many times before we would allow his over-excitement, hoping to deal with it ‘next time’ there are no more next times, he needs 100% of our attention at the moment. Once we have a little more balance we can support him in being the dog we know he can be.

Many, many thanks to you all for encouragement and support, and yes, Maggie is improving too, although her issues are minor compared to crazy boy Leo! 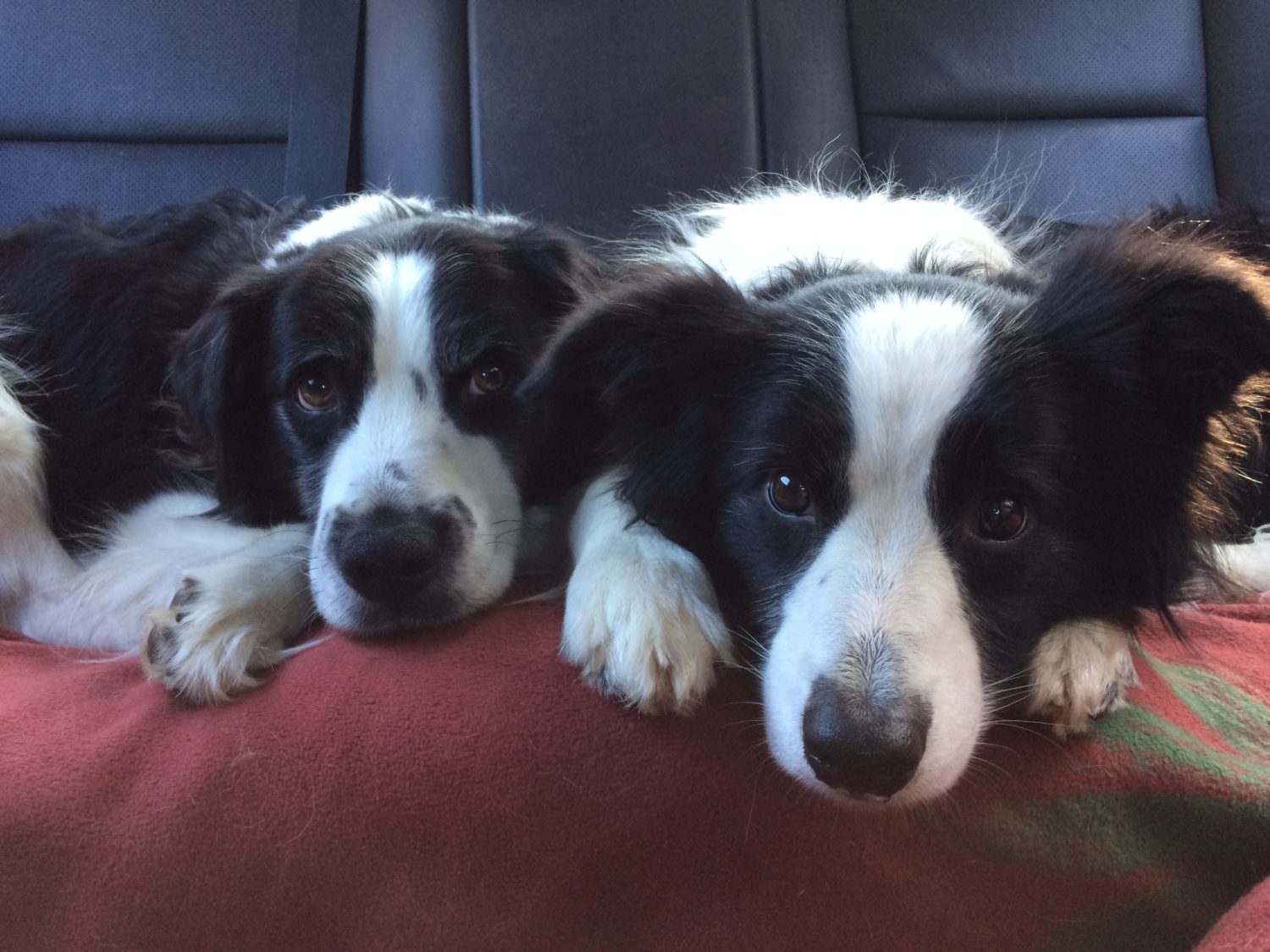 Graeme came to work with our two collies, one nearly 14 so “an old dog…. new tricks” and one five year old.. They both had quite different issues but after a day spent with Graeme, we realised that he should change his name to “husband training”! We still have some way to go but the dogs are responding really well to the techniques we learnt. The dogs were tired out and slept for hours afterwards… Thank you 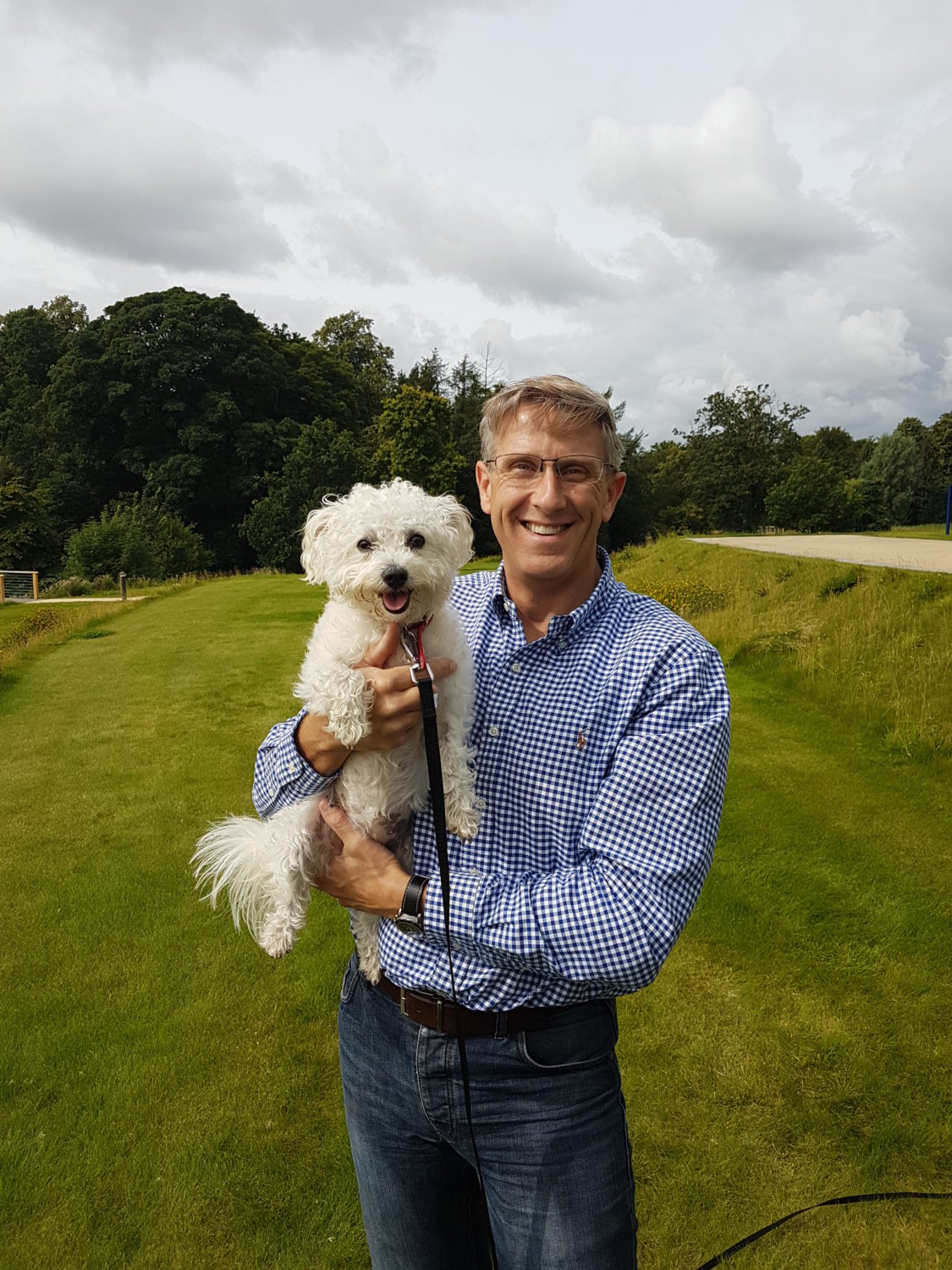 Graeme travelled up to Edinburgh in August to spend time with Mariela and I and of course our beautiful girl Mia. Mia is a west highland terrier / bichon cross with some behavioural issues and after two unsuccessful attempts from previous dog trainers it was time to call in the big guns!

Graeme was able to help us understand why Mia acted in the way she did and offer us excellent guidance to better manage our behaviour to improve Mia’s. I like that Graeme was able to challenge some standard training folk lore and was able to back this up with his impressive knowledge on dog psychology.

We had a great time with Graeme, a truly fascinating and entertaining individual and now look forward to continuing his good work resulting in a more relaxed little girl. In the two weeks since he was here we have noticed significant improvement and are confident that it won’t be long before we have accomplished all our goals.

Amazing! We asked Graeme to help us with our dogs Monty (Old English Sheepdog) and Alfie (Cavachon). We couldn’t believe the difference so quickly. Monty only jumped up once at the TV with a programme showing dogs, unlike all the time. He had second thoughts and stopped. If we hadn’t seen this we would have said it must have taken several takes to do this. He doesn’t pull so much on the lead and whereas before he was very reactive meeting other dogs he now seems a lot calmer, me included! Alfie walks better now and constant yapping is becoming a thing of the past… going out in the car is becoming a pleasure again. Graeme really is incredible and we all learnt a lot from him while having a good laugh and joke enjoying ourselves. We have seen how things can be changed including with how we think and know things will go on improving putting into practice what Graeme showed us. Thanks again Graeme! 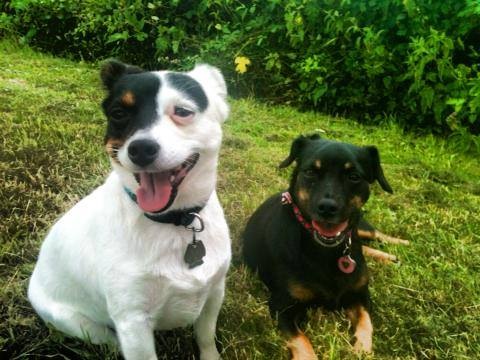 Graeme came to visit us to help with our dogs Buddy and Ruby. We believed Buddy to be a lost cause, a vet having told us he has a canine version of ADHD and autism. Ruby was scared of her own shadow and both dogs were rescued from a puppy farm. Needless to say they have awful mental health issues but we refused to give up on them. We had tried everything, Buddy had even had Diazepam and it hadn’t helped.

We then saw the wonderful “Dogs Behaving Badly” programme from C4 and the awesome Graeme! We decided that we would forgo our holiday this year and, instead, hire Graeme as he really was our last hope. He came to see us on Saturday 8 July and spent several enlightening hours with us! He was kind, funny, caring, confident and clearly a dog lover. He trained us as well as Buddy and Ruby. We started to immediately put into practice all that Graeme had taught us, knowing that it would take time, patience and consistency.

Today (10 July) its like we have two different dogs!! My clients came to the house and apart from the normal barking when someone comes to the door the dogs both settled down and there was no bad behaviour and no barking. Usually when people come to the house and they stand up after being sat down the dogs go crazy, today —— nothing!! They are walking much better on the leads and Ruby is no longer pulling and almost choking herself in the process. Its absolutely amazing what Graeme has achieved. Buddy will always have his issues no matter what, and we were under no illusions about that but its totally amazing what Graeme has done with them. He has given US the tools for life which we can make their lives less stressful and much easier along with making our lives less stressful in the process.

Its the best money we have ever spent. The back room staff were also amazing and an absolute credit to Graeme. It was just like welcoming an old friend into our home as he made everything so comfortable for us all. We would all like to thank you from the bottom of our hearts Graeme. 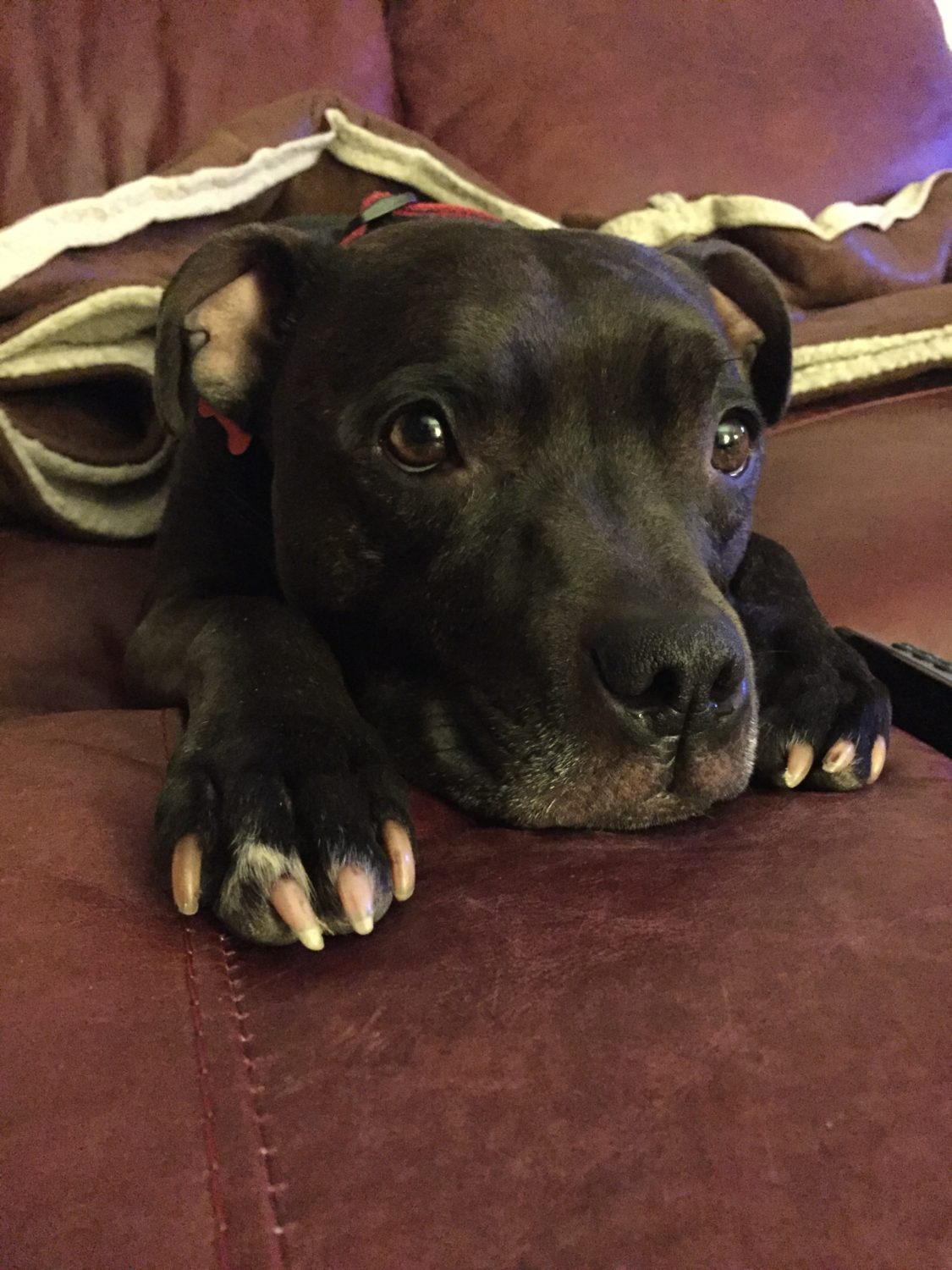 My husband, Chris, has already posted a review but I wanted to add a few words. Chris said on the day you visited us that “it was the first time he’d ever totally felt in control of our dog”. She’s 6 and we’ve had her since being a pup. It is now 9 days since you visited us. We have a different dog – well actually different owners! We’re practising being more stubborn than she is, and applying everything you covered in the house and out on walks.

Graeme your confidence and simple explanations on the day – as well as funny stories – made it an easy learn for us.

Thank you so much for giving us the toolkit and restoring more balance in our home. 🙂

Not bad for a Northern Monkey part ii

Graeme visited us in early May to help with our 3 small terrors sorry terriers and my wife Sue and I thought it time for an update. Monty is far more confident in himself the yellow nervous harness and lead have been a constant source of conversation in Stanford but more importantly it had resulted in a lot less aggressive behaviour from our boy. The lead or just our confidence, who’s to say but it’s working.
Our greatest success so far has been Cassy “no tail” recall, I’m pleased to report that our hard work and Graeme’s advice had worked, Cassy walked 3 miles on a river walk in Arundal this morning off the lead; fantastic. Sue and I could walk together like a normal couple.
Lulu long tail says hi too. 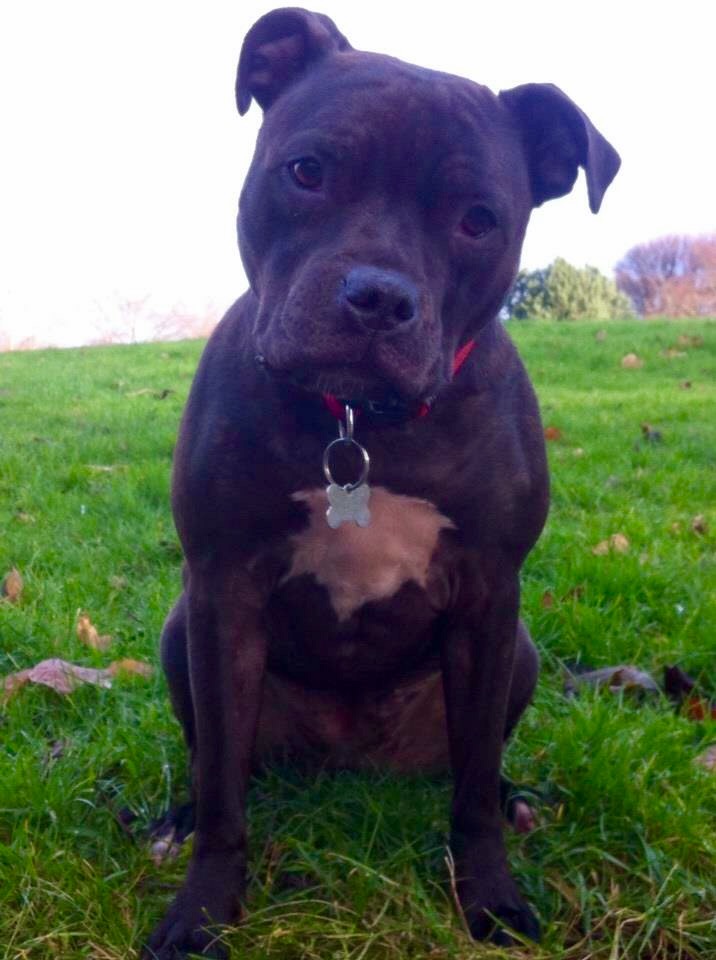 I’ve waited a few days before writing this review, I wanted to take Harley for a walk that would challenge us both. Historically Harley had wanted to attack other dogs she came near when on the lead. After the session with Graeme I have just taken Harley through a field full of dogs, some on lead, some not, without a hint of excitement from her or wanting to get at the other dogs. We also walked round a corner and came into close contact with two giant schnauzers. Harley didn’t flinch.

After 6 years of hating taking Harley for a walk, I’m now the owner of a very calm and stable dog. I now know it was me that was the problem, not Harley, thanks for fixing me Graeme, I look forward now to many pleasant walks with Harley! 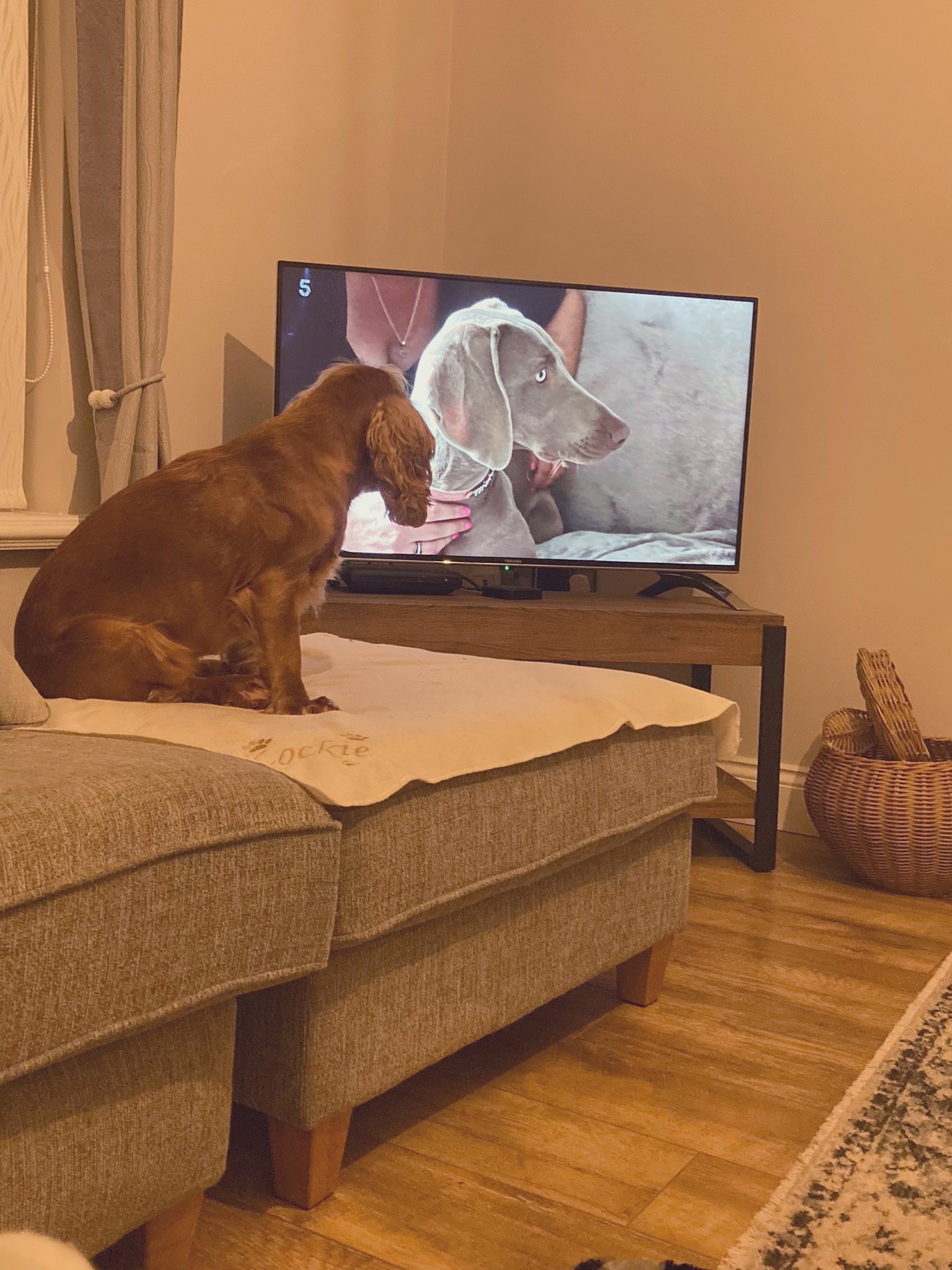 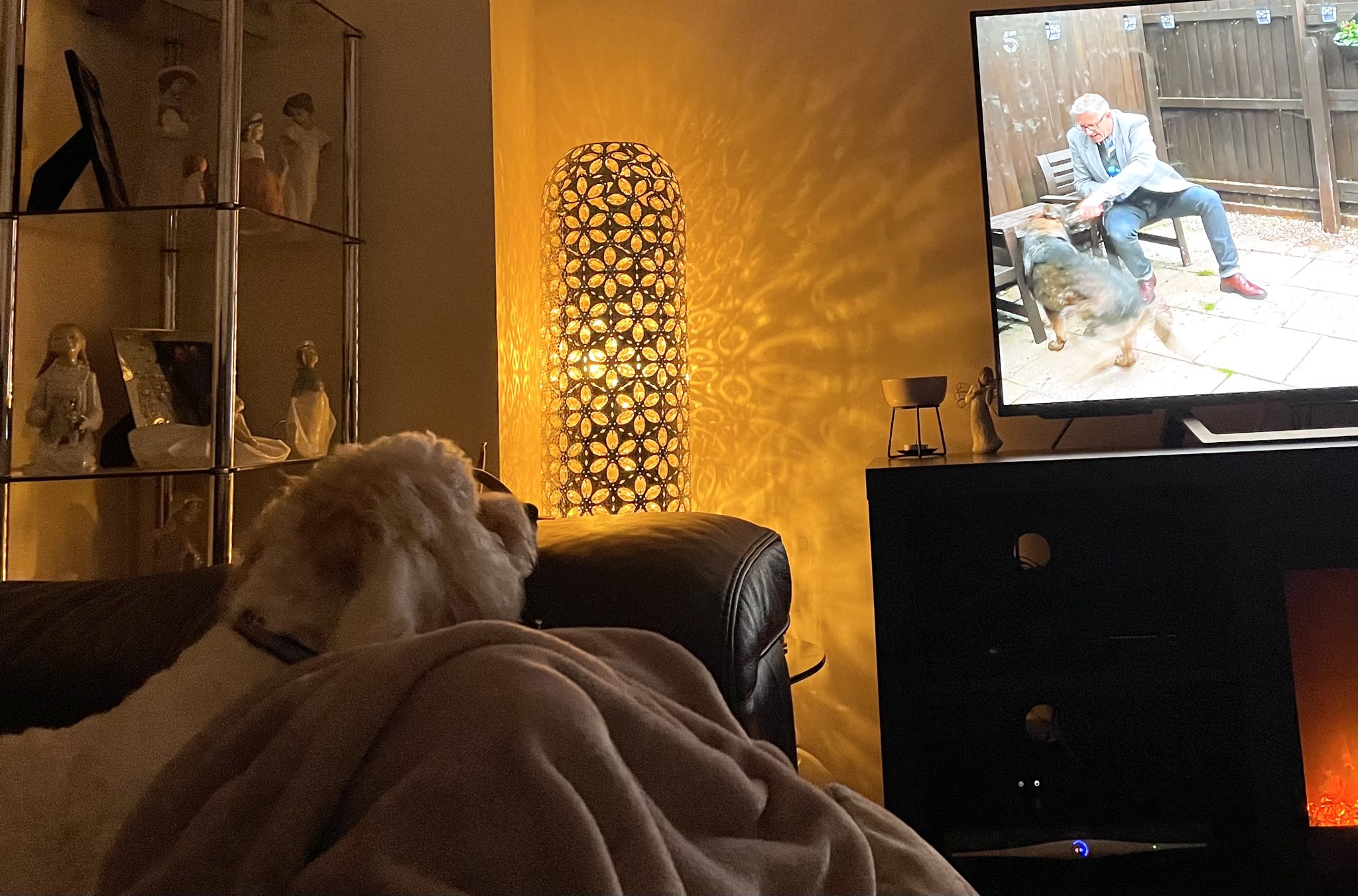 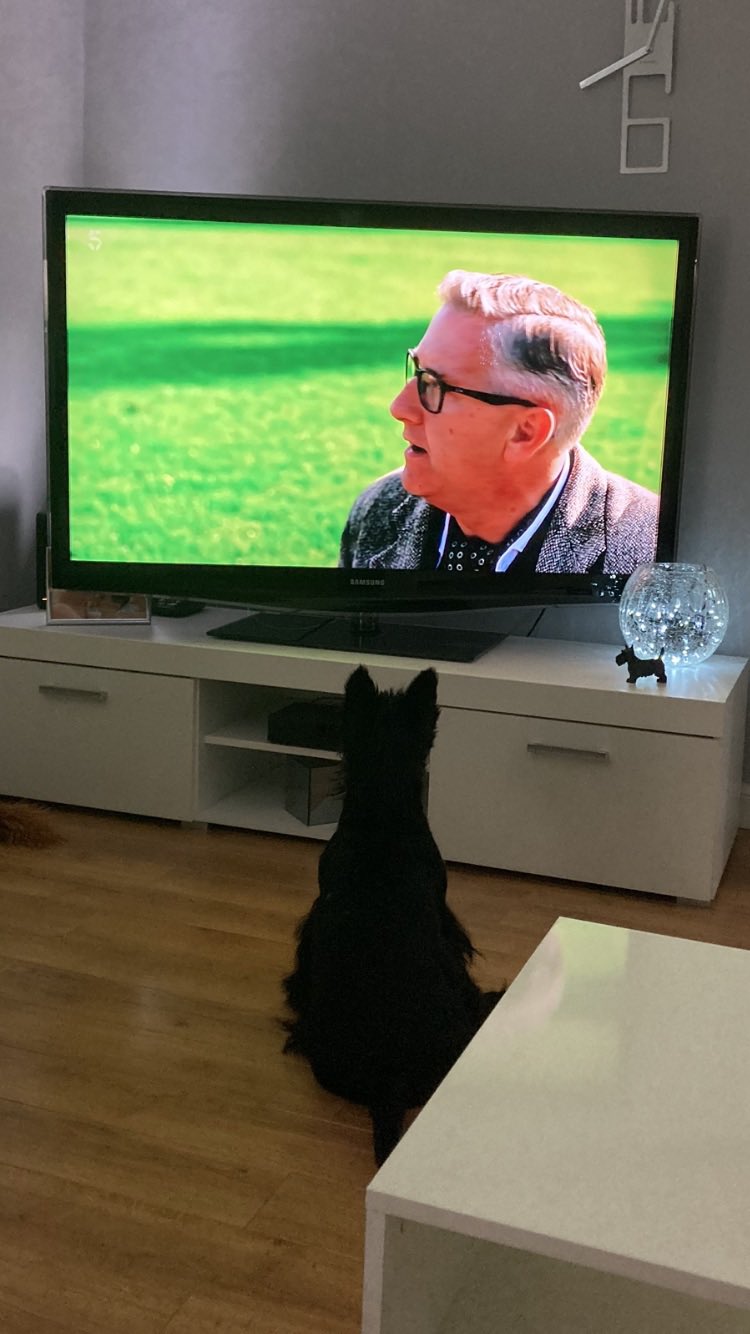